THE STORY OF THE KING JAMES BIBLE 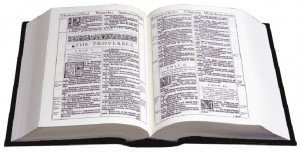 Publication of the King James translation of the Bible was a milestone in making the Bible more accessible to the general population in England. After an uncertain start, this translation became a best seller for almost 400 years, with billions sold and, due to its popularity was known as the “Authorized” or “Common” version. No other version has achieved such popularity, praise, and love. What is it about this version that has enabled it to endure? An examination of the translation process and its circumstances yields some clues to answer this question.

When James I ascended to the English throne in 1603, the time of William Shakespeare and Francis Bacon, the country was very involved with the things of God and the Church. As reigning monarch, James was head of the Church of England, England’s official Protestant Church. Everyone was required by law to attend Church each week or pay a fine.

Historical background – King James I and his vision

King James was an extremely scholarly man, the only English monarch ever to publish a book of his own works. He was also an ambitious man and a shrewd politician. His vision for England was that of a peaceful and balanced society.  However, the Puritans and the Bishops were great rivals in the Church and James needed to find a way to bind them together to avoid their stirring up discontent. After the conference of Hampton Court, the Puritans had suggested the idea of a new translation of the Bible. (None of the three existing Bibles, –the Calvinistic Protestant Geneva Bible, Queen Elizabeth I’s Bishops Bible, and the Roman Catholic Latin Vulgate Bible, –suited James.) James knew that compromise was the only solution and that neither the Puritans nor the Bishops could be excluded from the translation process. Sanctioning a new translation of the Bible, true to the original texts, –to the Word, which appeals to the mind, and would move the Church away from ceremony, which appeals to the senses, –seemed a promising proposition. Ever the politician, James placed the work under the control of the Bishops, but allowed input from the Puritans.

Goals and Rules Governing the Translation and Ambiguity

The translation process began in 1604. The whole venture was a deeply scholarly enterprise. The approximately fifty translators assembled to do the work were men of great scholarship, several of whom were fluent in multiple ancient Biblical source languages. They were men who would be considered highly educated and cultured today, although they could by no means all be described as pious. In a prefatory note to the readers of the King James Version, the translators wrote

“Truly we never thought from the beginning, that we should need to make a new translation, nor yet to make of a bad one a good one, but to make a good one better, or out of many good ones, one principal good one.”  Adding that “whatsoever is sound already the same will shine as gold more brightly, being rubbed and polished; also if anything be halting, or superfluous, or not so agreeable to the original, the same may be corrected and the truth set in place.”

One goal of the new translation was to connect the reader directly with the meaning of a message recorded in ancient languages, generally unknown to the reader. The translators took their work very seriously, sometimes debating at length over a single word. There was a commitment of total fidelity to the original languages, but also to total transmission of the depth of meaning to the reader. To maintain this purity and his other goals, James instituted a set of 15 rules governing the translation process. According to these rules, marginal notes and commentary (to explain some of the more ambiguous passages or words for which there was no equivalent English word,) were forbidden. Translators inevitably exhibit bias, and marginal notes -if printed in the translated document- will reflect that bias to the reader, thereby effectively forming a barrier between him and the original text, and inhibiting individual interpretation. The “no marginal notes” rule had the effect of forcing the translators to find the words or phrases that could convey the multiplicity of meanings of the original. Annotations, found in the margins of some of the original source works used in the translation process, indicate some of the alternative words the translators had considered using. Other notes show the great ingenuity of the translators in their use of phrasing and judicious punctuation to get closer to the original, and to preserve ambiguity.

Ambiguity arose because there were some cases where the translators admitted that they simply did not know what was meant by the original. This visible ambiguity in the King James Version is sometimes criticized, but actually it has great value. Ambiguity, by allowing for multiple meanings, requires the reader to be an active thinker, not just a passive reader, and also demands that he take upon himself the responsibility for interpretation. Ambiguity in meaning, when worked with and pondered, gives the reader the opportunity to grow in his understanding of complex ideas, so that increasingly he grasps the higher and deeper meanings which at first reading maybe he didn’t see, or wasn’t ready to understand.

The translators were also conscious that the Bible was to be read aloud in Church, and that therefore the way the text sounded when read aloud was important. In considering which words to use, they looked for sounds of greatness and chose words to try to convey a sense of the divine, so that the people would realize that they were in fact hearing the Word of God. They knew the text must flow and wanted the words to sound like music to the ear when read.

Completion of the Work and Its Aftermath

The translation process was completed in 1611, but the new Bible at first met with universal loathing. Puritans thought the translation too “high church,” too formal. After the death of King James and the murder of his son, England descended into civil war, and the King James Version of the Bible was left to gather dust for some 30 years. But after the Civil War, in 1660, people seemed ready to embrace the new translation as part of a renewal and a fresh start. The King James Bible came to prominence as a link to the past, specially prepared for the Church of England. Phrases borrowed from it have become part of the very fabric of the English language. The King James Bible has been described as the most influential book in the English language. Through the work of missionaries, it has been carried to every corner of the English-speaking world.

While there are now many Bibles available in modern English, most, but not all, are re-workings of existing versions, rather than totally new translations. An exception (and one of the earliest modern English Bibles) was Ferrar Fenton’s 1903, “The Holy Bible in Modern English”. Fenton, an ancient Sanskrit, Greek, Hebrew and Latin scholar, had as his sole goal “to study the Bible absolutely in its original languages, to ascertain what its writers actually said and thought”. Today’s modern language Bibles cover a broad spectrum of purposes and interests, and some are very contemporary. For example compare Genesis 1:1-2. First the King James Version reads:

“In the beginning God created the heaven and the earth.

And now the contemporary version published in 2003:

“First off, nothing! No light, no time, no substance, no matter. Second off God starts it all off and whap stuff everywhere.” 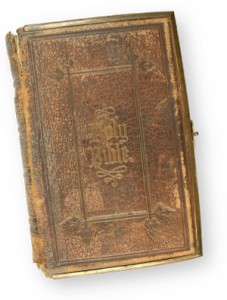 What will a modern day reader look for when choosing a translation of a classical text written thousands of years ago?  Could he be satisfied knowing that highly educated, cultured scholars undertook the translation? Could he accept the use of ambiguity as a means to draw attention to passages with a multiplicity of meaning?  Will he want to make sure that the translation conveys the greatness of divinity through the beauty of expression? He probably will. The King James Version will likely have an audience for some time to come.

This exhibit is available for display in your Reading Room.
First Church of Christ Scientist, Pasadena is happy to make this exhibit available to any other Christian Science church wishing to stage a similar exhibit in their Reading Room. We can provide an e-file and much encouragement to help you! Please call our clerk at (626) 793-5151 for more information.

This exhibit is copyright © 2012, First Church of Christ Scientist, Pasadena